Anonymous Hits Back at Ferguson Police with #OpFerguson 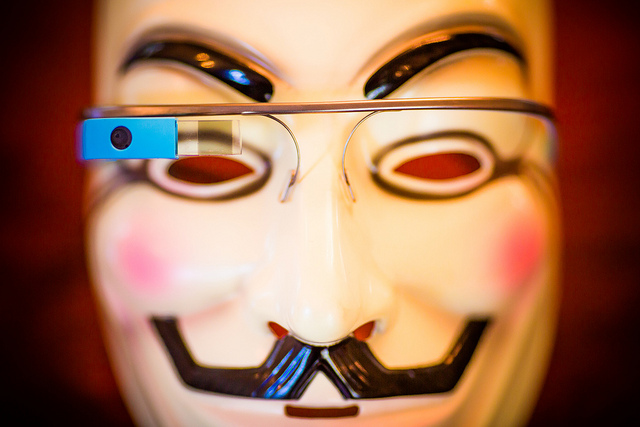 AnonGlass takes a good look at the Ferguson police

When the Ferguson, Missouri police fatally shot unarmed teenager Michael Brown (hands in the air when shot, according to witnesses), they did what Israel hadn’t been able to do in weeks: they took the focus of Anonymous off Gaza and put it squarely on themselves.

Greetings world, we are Anonymous.

On August 9th in Ferguson, Missouri the 17 year old and unarmed Mike Brown was shot several times and killed by an officer of the Ferguson Police Department. His body was left to lie in a pool of blood in the sweltering heat for hours while 15 police departments militarized the area against protesters, sealed the roads leading to Ferguson in a vain attempt to prevent protesters from reaching the city. The police has clearly crossed a line in the sand.

For this reason Anonymous will not be satisfied this time, as we have in the past – with simply obtaining justice for this young man and his family. Anonymous demands that the Congressional Representatives and Senators from Missouri introduce legislation entitled “Mike Brown’s Law” that will set strict national standards for police conduct and misbehaviour in the USA.

To the good people of Ferguson, take heart – and take your streets. You are not alone, we will support you in every way possible. Occupy every square inch of your city. Demand justice, staying silent today could result in the death of your kid tomorrow.

To the Ferguson Police Department and any other jurisdictions who are deployed to the protests: we are watching you very closely. If you abuse, harass – or harm in any way the protesters in Ferguson we will take every web based asset of your departments and governments off line. That is not a threat, it is a promise. Attacking the protesters will result in the release of personal information on every single member of the Ferguson Police Department, as well as any other jurisdiction that participates in the abuse of this States own law. We will seize all your databases and E-Mail spools and dump them on the Internet. This is your first and last warning.

Until justice prevails, hack and protest will replace it.

That Anonymous video, uploaded Sunday, announced the creation of #OpFerguson. There is also a website. As with many previous anti-cop-brutality operations from Occupy Oakland to OpFullerton in memory of murdered homeless man Kelly Thomas, the operation targets both the police department and the individual officers involved. Uniquely in this case, they have also immediately decided to escalate this to the federal level, saying the problem is widespread and systematic and that leaving things to municipalities and states is clearly making things worse.

"Nothing is more despicable than respect based on fear." – Albert Camus
#OpFerguson http://t.co/TBPHYYt4rk—
Anonymous (@YourAnonNews) August 11, 2014

In the meantime, they’re not exactly sitting on their hands. The police department’s web presence is a sub-page of the city website: both were down for several hours last night, and KMOV reporter Laura Hettiger reports that all city emails are still down. That would indicate much more than a simple DDoS attack; it articulates Anonymous access to their mailservers, and every city hall employee should assume their emails are now being pored over by hackers. And that their passwords are as well.

UPDATE NEXT DAY: Turns out the hacktivists didn’t seize control of the email servers. As they explained in our interview with OpFerguson, they used a technique dating back to 2007 called an “Email Bomb” to flood the email boxes and shut down the system that way; they did not actually get inside.

Widespread tweets that city hall phone lines are also down were unconfirmed when this article went live, but who would be surprised if they’re ringing off the hook and nobody wants to answer them? That was the case in OpFullerton.

@ksdknews I Have Nothing But #Respect For #Anonymous They Warned Them..They Brought National Attention To The #Rape In #Steubenville #Fact

The operation has caught the attention of non-Anonymous community members both in Ferguson and online, vastly increasing the reach of #OpFerguson and tapping in to the frustration that many in the US have long felt towards The Powers That Be and their increasingly militarized and politicized police force. Far from being viewed as guardians of the peace, the increasing use of police as an anti-civilian strike force deployed for political reasons has re-cast them as stormtroopers of the 1% in the eyes of many.

Many who are now speaking out quite publicly on the #OpFerguson hashtag.

A hashtag that didn’t exist four days ago has now topped 4,100 tweets, a significant push which is clearly headed towards a foothold on the national trending list. The spread of the hashtag outside of Anonymous as well as the “you go girl!” Anon-supporting posts by non-Anons indicates clearly the rise in widespread, even mainstream, acceptance of Anonymous as a just and effective countermeasure to police brutality. Many are making the explicit comparison to the public support for OpSteubenville, against the Steubenville rapists.

in this day and age, #anonymous is the last group of people you want to piss off

That said, Twitter shut down the @OpFerguson account, apparently for too many @ direct mentions; that’s  a spam technique, and the suspension was probably automated. The account is back online and tweeting this morning.

Anonymous will only launch cyber attacks in Ferguson in direct response to any police abuse of protesters. | #OpFerguson #Anonymous

We are all in this together Ferguson, we will never desert you. If this happens again, we will have a back-up account ready. Again, sorry.

We've a special request from the Brown Family to the entire Internet: Please remove any pics of Mike Brown laying prone when he was shot.

After reports of looting overnight, death threats and shots fired at the sheriff and deputies, a peaceful protest is scheduled for 10am this morning local time. The police maintain that the rioters came from outside communities, not Ferguson. They had attempted to close roads into town to prevent outsiders from attending the thousands-strong vigil for Brown on Sunday. They had failed.

The city’s motto is: Proud Past. Promising Future.

Anonymous has promised to be a part of that future, at least until it has made Mike Brown’s Law a reality.

UPDATE: There is a White House petition to make Mike Brown’s Law a reality.

Like Loading...
‹ Interwebbed: Top Cyber and Crypto Stories for Your Monday
A Brief History of Inappropriately Invoking George Orwell ›