#HandsUpWalkOut: #Anonymous and #OpFerguson call for General Strike in Missouri 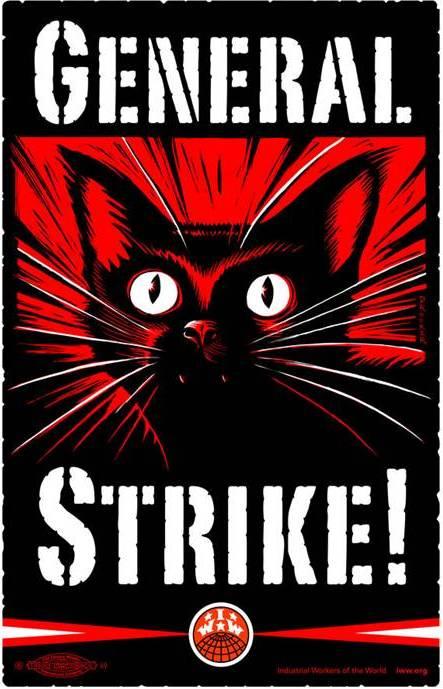 It’s not every day there’s a Statewide General Strike called by a faceless, headless group of Anonymous hacktivists rather than a political party or labour union. But it is Friday.

This Friday, August 29 (handily, the last Friday before a Monday long weekend, as if you needed any more incentive to participate), OpFerguson and Anonymous have called on the workers of the State of Missouri to walk out in a General Strike.

It’s not the first time Anonymous has asked for a General Strike though; in 2012 Anonymous supported and publicized the Occupy movement’s International May Day General Strike, which called on people in 135 cities worldwide not only to step out on work, but also avoid spending money, avoid participating in the various consumerist traps of the 1%.

Anonymous was of course involved in the creation of Occupy itself.

The strike was symbolically effective, but failed to paralyze any single city or bring any elites to their knees. Bank Transfer Day, when Occupy and Anonymous encouraged people to move their money from the Big Banks to local credit unions and other alternatives was comparatively and quantifiably more successful, with estimates of up to $180 million moved.

Now Anonymous, and in particular the OpFerguson team, has called for a one-day strike and demonstration in Missouri this Friday. Using the hashtag #HandsUpWalkOut, derived from the Mike Brown-inspired #HandsUpDontShoot tag, they are spreading the words on Pastebin, Twitter, and AHEM for reporters who failed to notice the announcement on Wednesday and who shall remain nameless, email as well.

The State of Missouri continues to ignore the demands of the people for reform and justice. And so the time has come to take our fight to the next level. We hereby call a Statewide General Strike in Missouri this Friday August 29th for one day. The theme for the action will be “Hands Up & Walk Out” and includes both workers and students, who are encouraged to take the day off – not to mention the long Labor Day weekend, to organize and protest across the State of Missouri.

This is only the beginning. If the righteous demands of the people and Anonymous are not met, the General Strikes will continue, become longer – and will be expanded to include the entire USA. This is no longer about “no justice, no peace” – now it’s about “no justice, no profit”. There will be reform and justice and an end to the killing or we will together shut down the entire country.

This Friday, Expect Us again.

People in Missouri, keep talking to your friends & family about Friday's General Strike. No justice, no work. | #HandsUpWalkOut #OpFerguson

Much has changed in Ferguson, Missouri in the days since Mike Brown was shot. Anonymous has been involved since before the body was bagged, email bombing the police, DDoSing their website, doxing police officers and city and state officials, and tweeting: @OpFerguson has racked up almost 11,000 tweets in the 18 days since its birth.

The case has been taken up by activists across the country.

Justice For All Those Killed and Brutalized by Police Aug 30 3 PM 100 West 1st St https://t.co/1y8VwVHqdO pic.twitter.com/auTfWTa7XH