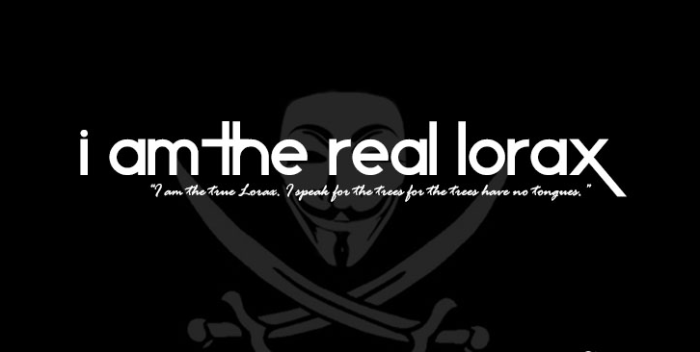 Adam John Bennett aka Lorax, famed former host of Lorax Live on RadioAnonOps, has pled guilty to six charges; sentencing will be in March of 2016. A source close to the case has filled in details which have long been scarce since the defendant has been under a gag order, excluded from the internet except for work, among other restrictions. He has been silent since May 17, 2014.

His fiancee tweeted the news of a sentencing date:

@garymlord Adam was in court today for a mention hearing, his case has been set for sentencing in March 2016 #FreeLorax

Bennett was arrested May 22, 2014, and charged with hacking into AAPT Communications and Indonesian government servers as part of #OpAustralia. Later, he was charged with penetration-testing a site he was paid to maintain; in other words, he performed a routine performance test to evaluate the security of the website, and the Australian government charged him with hacking it. Our source reports that Bennett has spent over $200,000 in legal fees, and the fundraiser has stalled just over $3,000. “There were something like 24 charges in total when this began,” our source reports, before going on to say they have all been dropped.

UPDATED TO ADD: A different source, who also declined to be named or quoted directly, said that 22 charges have been winnowed down due to lack of evidence. Australia does not have plea deals in the US sense, but it’s not uncommon for many charges to be thrown out or dropped in the course of court proceedings.

Instead, Bennett will face sentencing on six vastly reduced charges, which we are not at liberty to reveal. There are many potential computer crimes Australia has on the books, which gives them a wide scope to charge, but many of the laws are new and relatively untried in court. The significant reduction of charges is surprising, given the effort and money thrown into the cybercrime initiative on the part of the Australian government since 2012, and ongoing to the present. Guess that $200,000 was well-spent.

While waiting for his legal troubles to be resolved one way or another, Bennett has maintained a busy work schedule as director of two companies, although some opportunities fell by the wayside. Outside of work he has maintained his community involvement, including working as a lifeguard. Indeed, it’s likely that his long-time involvement in community service, both outside and inside Anonymous, is a factor in the eventual resolution of his legal travails.

In honour of his long service and high standing in Anonymous as the radio host who brought the world together, Anonymous honoured him with a tribute video, pointing out that within the Hive, his role was largely that of a journalist, and should be protected. The video features remarks by American lawyer and firebrand Stanley Cohen, himself released just a few days ago from prison.

From the Notes on that video:

In the last few days, it has been reported that a prominent voice within the Anonymous community has been arrested alongside another. Lorax was an outspoken individual who, above all, truly believed in the various operations and causes of not only Anonymous, but also those outside the collective who shared similar ideologies. He reached out to those he felt had an aim worthy of promotion on many occasions, with such causes as freedom of speech, freedom on the internet and those against the machinations of the state which aim to take away the privacy and freedoms of opinion and expression that he felt we should have. In the course of this, he and his show have been invaluable in spreading the various messages from the guests he had; we now ask those guests to show solidarity with the man who categorically believed in them.

To all of you who have been given a time at which to discuss your cause, promote it and be supported by Lorax, we ask that you stand by him during this difficult time with public acknowledgment of your support for him in any way you can. If we don’t show solidarity with those who will go out into the public eye and will voice the fight that many of us feel we face, then we may end up without such a voice entirely.

We are the Lorax,
We speak truth to power,
We fight for a more just world,
We are the peaceful future,
Expect us. Free Lorax!