James McIntyre of Dawson Creek, British Columbia was shot to death by one or more RCMP officers at about 6:30pm last Thursday night, July 16. Police had been called to deal with a disturbance inside the Fixx Urban Grill, where an open house was underway for BC Hydro’s contentious SiteC hydroelectric dam. They never got inside, instead confronting and shooting McIntyre, who had not been involved in the disturbance, outside on the sidewalk. As he lay on the pavement, bleeding into unconsciousness and ultimately death, at least two bystanders videoed the police walking up and kicking away something in his hand.

On his face was a Guy Fawkes mask, which is where Anonymous came in. And come in, they did.

Our brother has fallen, and now we shall rise. | #BrothersKeeper #OpCyberPrivacy |

Both Dawson Creek detachment and main RCMP sites were DDoS’d offline over the weekend, and activists gave The Cryptosphere a tour through some vulnerabilities in government sites. In particular they demonstrated weaknesses in the site for Aboriginal Affairs and Northern Development.

We spoke to them about their plans for future retaliation. The fallout has divided Anons into two camps: one, led by the team behind the Canadian-focused OpCyberPrivacy, specifically ruling out a violent response, the other somewhat more fiery, albeit as yet unspecific. 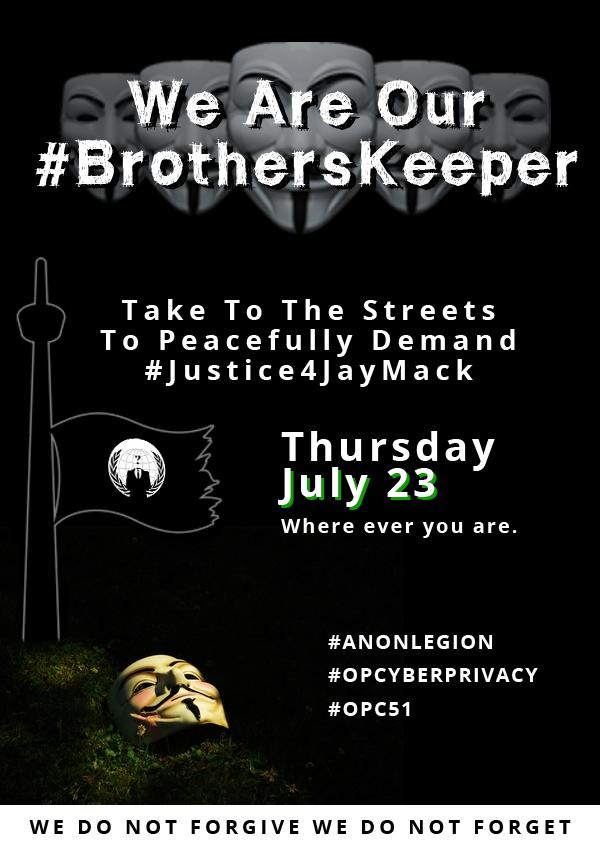 Greetings Citizens of the World,

We are Anonymous and this is Operation Cyber Privacy,

This week we have turned our resources toward the crushing and horrific murder of our brother Jay Mack; a known and loved Anon within the collective for many years. His death falls upon the heels of the passing of ‘anti-protest’ bill c51 in Canada and brings with it sadness, frustration and a ferocious thirst for justice.

On July 16th 2015 James Daniel McIntyre was attending a planned and public protest against BC Hydro in Dawson’s Creek, British Columbia. RCMP were called to address another individual, yet somehow managed to set sights upon the wrong man. As a result, and because he was allegedly in possession of a knife, our brother was viciously murdered. He was not shot to disarm. He was not grappled by the two large officers on scene. He was not handled with reasonable force as mandated by law enforcement guidelines. He was shot to death from several feet away by a trigger happy officer.

We are our brothers keeper, and in true Anon fashion, comrades across the globe began popping up one by one to seek vengeance for his slaughter; to demand the firing of and appropriate criminal charges laid upon this murderous cop.

Anonymous stands for many things but there are two things it does not stand for. Violence and notoriety have no place within this movement and haven’t since the very grassroots of its inception. Especially at a time when so many are mourning the loss of a passionate and beloved brother. We encourage our brothers and sisters to react not in anger, but rather in solidarity. Our quest for justice for Jay Mack will be coordinated, strategic and non-violent.

We are calling upon our brothers and sisters and citizens of the world to join us. Join us in ensuring the officer and any other entity, with the blood of our fallen staining their hands, are brought to justice. Join us in supporting his family while they a-wait justice for their own.

We will be commissioning a series of DDOS attacks against those we feel have contributed to the allowance of this crime. As we attack the web, we call out to others to march in streets to demand justice for our fallen brother. Street rally event pages are popping up on social media across Canada and beyond, for Thursday July 23rd. We will tweet out any updates we receive, as we receive them.

We are not going to sit by and let the RCMP get away with murdering one of our brothers. We will stand beside our fallen. We will have our voices heard. First they took away our right to protest and now, for that very thing, they are gunning us down like street rats….This is the revolution!

RIP Jay Mack – We will not forgive

A Tweetstorm was called for Wednesday the 22nd, and with four hashtags to split the energy, none succeeded in trending nationally or even in British Columbia. The Tweetstorm paste has had 915 views. A second paste from the other Anon team has had 513. #BrothersKeeper #Justice4JayMack #OpCyberPrivacy #SiteC are the hashtags that were chosen.

#BrothersKeeper topped out at 461 tweets on the day of the Tweetstorm, by far the most of any of the hashtags. By contrast, #AnonDown has had 2960 over the past week.

Additionally, real life protests have been called: while the Wilderness Committee canceled their large planned protest in Vancouver due to what organizers characterized as the possibility of violence, other events have sprung up instead. A Pastebin announcing the IRL protests has had 1476 reads so far.

OpAnonDown on Facebook, from the original OpAnonDown team, has over 800 members.

And according to Cyberguerrilla, the website of the BCEA was hacked and 2000 passwords were leaked. The company claims the passwords were encrypted and not in any danger and anyway, have all been changed now.

So far, while there are several Facebook events planned, there is a visible lack of appetite for showing up anywhere, particularly wearing a mask.

We spoke to the OpCyberPrivacy team to get a sense of what the RCMP, BCHydro, Dawson Creek, and the rest of the world can expect.

SirSub: “We will be DDoSing (etc) several Canadian government and law enforcement webspaces. I can’t disclose which for opsec reasons. We are planning multiple street actions, the main being at the scene of the murder. We’re hoping people rage in the streets until there is justice. We support any groups and organizations who are fighting for justice for Jaymack. We mostly [merely] coordinate them, unless someone steps up.”

“This was his legacy and we intend to help see it through.”

Sir: “Too many dead this week.”

Dials: “This is what happens when things go unchecked. This is just a tiny example to the entirety of things. The balance between power, what’s done and not done. The officer needs to be tried for murder, and an investigation and review over his head peers. And this is only the beginning of things to come; this is what happens when you have a state that empowers itself and not through its people.”

The Cryptosphere: If this is the beginning, what does the future look like?

Dials: That is a good question, something no bill or bullet can answer, but [only] the actions proposed by the people.”

SirSub: The only justice we can achieve at this point is firing and criminal charges. He needs to be held accountable for this. Jaymack may have been in possession of a knife, he may even have refused to drop it…we do not know this for certain yet… but we do know he didn’t attack, and we do know they acted outside of typical reasonable force.”

“Now they are KILLING us. This is the revolution, as we stated in our video. This HAS to be the line. JayMack could have been ANY ONE of us. He was one of us. We are all at risk. A total surveillence state is what we’re looking at, if things do not change, and quickly.”

Dials: “Key players within Canadian politics have taken some tips from US government, on how to fuck its country and its people.

The Cryptosphere: Do you think there is a coordinated effort to use police as political enforcers?

The Cryptosphere: Do you think there is a Big Oil/Hydro/Gas agenda?

Sir: “Of course there is. Are you shitting me? This is Canada!”

Dials: “Corporations have a serious part in this, yes, and lobbyists are just feathers in politicians’ hats. There’s more to this that can be said…”

Sir: “Armed RCMP going after the native population is nothing new….”

Sirsub: “This is an ongoing issue: Canadian officials have been targeting out native population since the beginning of time. C-51 is targeting them as well as any other cultural group.”

The Cryptosphere: What can people do to participate and show support?

SirSub: “Join the channel on IRC, participate and organize rallies…”

Dials: “Go into the street with organized protests…”

SirSub: “Which we are planning and prepping for as well!”

SirSub: “Any nonviolent way they can think of to force justice for our brother.”

Sir: “People need to voice their opinions and feelings. Anonymous can only do so much.”

SirSub: “We are the oil, the people are the machine.”

Sir: “First and foremost we are an amplifier for the voices of the oppressed, ignored and downtrodden.”