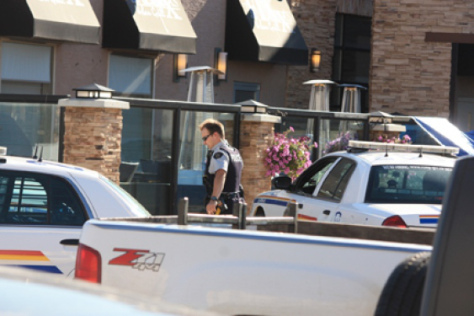 Dawson Creek RCMP await the arrival of IIO investigators outside the Fixx Urban Grill restaurant, where a man was shot dead by police Thursday night outside a Site C open house. Police held the scene while members of the independent police investigations office flew in from Vancouver.

RCMP shot and killed a masked man outside a restaurant in Dawson Creek last night.

Investigators from the Independent Investigations Office (IIO) boarded a flight from Vancouver this morning to Fort St. John and were expected to be in Dawson Creek around 11 a.m.

The shooting took place outside the Fixx Urban Grill restaurant at the Stonebridge Hotel on Highway 2 near the outskirts of the city. RCMP were called to the restaurant around 6:30 p.m. last night to reports of a man disrupting and damaging property at a BC Hydro open house on the Site C dam project.

Like Loading...
‹ #Anonymous Alleged Hacker Lauri Love Released on Bail
#Anonymous Responds to #RCMP Shooting of Their Own ›