This report and the photos come to us from our old friend Joe Solomon, who is on the scene in Paris for the Climate Talk protests, and originally appeared on Common Dreams.

Early Sunday morning, activists with Avaaz set out a sea of donated shoes in the Place de la République, representing the thousands who were outlawed from marching in the streets. (Photo: Joe Solomon)

The day began at dawn, as Avaaz and their early-bird volunteers laid out a couple thousand pair of shoes in the Place de la République, in the shadow of the statue of Marianne.

You’ve seen the statue of Marianne if you’ve seen any picture of people mourning in Paris: it’s where votive candles, French flags, and flowers surround a powerful woman holding out an olive branch. It’s the most iconic site of sorrow – where people rub their eyes and then, these days, whip out their cell.

This woman, Marianne, is perhaps the French equivalent of our Statue of Liberty – with a dash of the Mockingjay mixed in. She is the symbol for French’s overthrow of its monarch-led past, and represents “an icon of freedom and democracy against all forms of dictatorship.”

And so it had a degree of irony that, in the same park as Marianne, activists were forced to host a silent shoe’s-only demonstration, since President Hollande recently banned all public protests as part of an unprecedented state of emergency.

The photos though were powerful. Kids shoes mixed with high heels, mixed with Keds – each representing the thousands who were forbidden from marching. Former Philippines Ambassador Yeb Sano donated his shoes, which carried extra meaning, considering he had just walked all the way Rome, on an awareness-raising pilgrimage to the talks.

All the shoes, 1000s of which were generously donated by Parisians over the past few days, were then bagged up and donated to a local charity.

Then came a “Human Chain”—an action that was seemingly blessed by the police, in which people locked arms for what seemed like an endless number of blocks, holding messages you’d expect about Mother Nature and going vegan, but also you couldn’t help but notice the peace signs. One child caught my eye who was holding a rainbow flag (which represents peace in Europe), with the word “Climate En Danger” emblazoned over it.

Like the shoes-only action, the images generated by the Human Chain were beautiful and more jubilant than solemn. 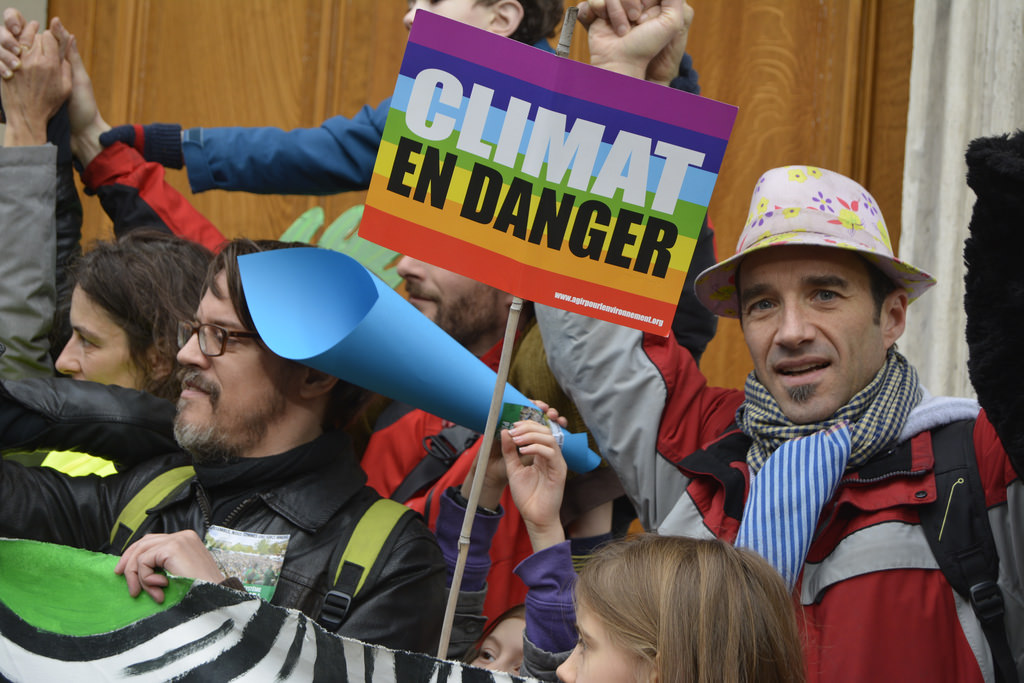 1,000s gathered to create a Human Chain across Paris — as a creative way to avoid breaking the protest ban. (Photo: Joe Solomon)
Many people posted photos of the Human Chain online as a victory: as a show of bravery – especially given that Paris is still reeling from the attacks. And nobody’s really officially allowed to get together in large numbers for political demonstrations – even if you’re in a chain.

Bu the day did not end there.

After the chain dispersed, many people returned to the Place de la République, and what seemed like a hybrid occupy and black bloc contingent started to gather momentum – French chants of “Let’s destroy capitalism because it’s destroying the planet” moved through the crowd. Bandanas, scarves, and red noses covered peoples’ faces. But it wasn’t just undercover radicals: some people were wearing hot pink Climate March t-shirts (the same shirts as the shoe-action organizers).

Within short order, this mass had cycloned itself into a march, and took the streets – surprisingly a few thousand strong. There was no doubt left: every one of these protestors was in defiance of the President’s orders.

It wasn’t long until the march met a line of riot cops – gendarmes had blocked off all the side streets leading from the Republique.

The protesters got louder, holding up their own barricades. The clowns got up close to the riot shields, someone threw a shoe into a shield (one expects it came from the free pile), someone else threw a bottle. Then cops threw a tear gas canister back, which exploded with a bang. 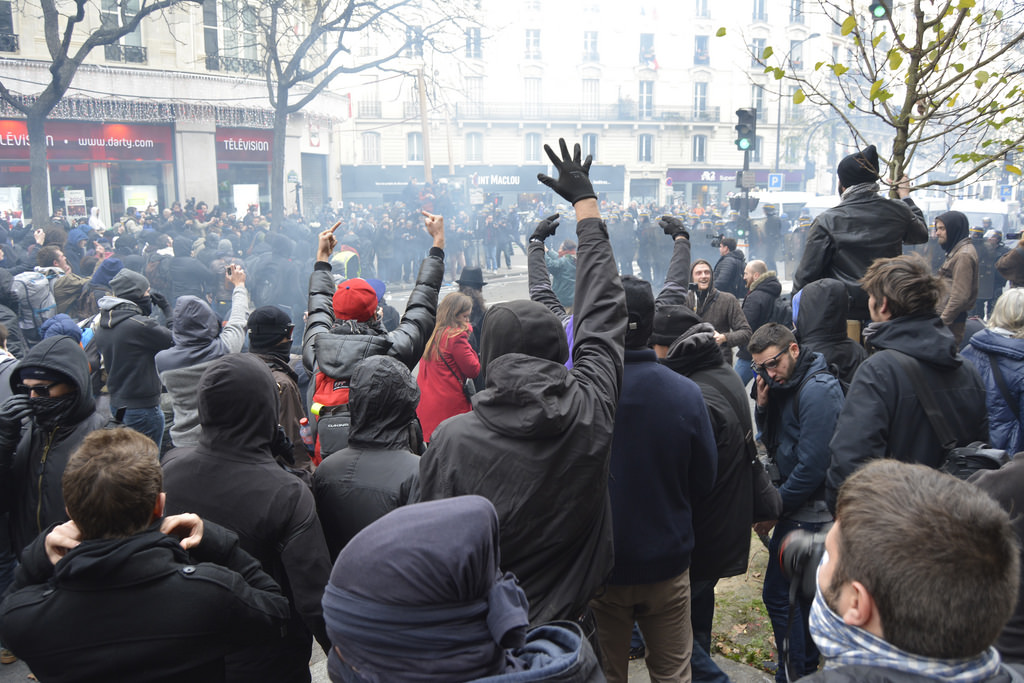 The scene after the first tear gas canister exploded. (Photo: Joe Solomon)
All of this escalated some more, and soon afterwards the pepper spray came with a vengeance. More flash bang tear gas canisters were thrown. Protestors were soon “kettled” (surrounded by cops) – and over 100 were arrested. Many who were arrested, according tolive-tweets from inside the kettle, weren’t even a part of the protest.

In the wake of the arrests, there’s been some distancing between the shoe and human chain organizers on the one hand, and the more raucous tear-gas exposed protesters on the other.

It’s kind of easy to write off these black bloc activists as trouble-makers, as people who violated the delicate negotiations that are clearly in play between activists and the police (whether real or played out in the streets).

And yet public defiance is just what this moment calls for. As Naomi Klein tweeted late Sunday night, “the government response to the climate crisis is wholly inadequate and puts us all in great danger. Obedience in the face of this failure would be tantamount to acquiescence.”

Tim DeChristopher, a climate activist in the US, wrote on Nov 17th that a banned protest makes for a more powerful one.

“Our movement has the choice of how to respond to this attempt at repression, and this development just raises the stakes,” wrote DeChristopher. “Since the power of our movement is in the display of commitment and resistance, an unwanted protest is far more powerful than a sanctioned one.”

My sense of things is that these Parisian bottle-throwers just made a massive opening for the climate organizers who’ve clearly been on the weaker end of police negotiations. Until now, we haven’t had any leverage with the gendarmes. Now we can say: If you don’t let us raise our voices and march for our demands, we will promise simple, blunt revolt. You cannot contain a revolution: a vice-like grip only makes protest uglier. Now give us some more leeway than just a place to put our shoes or lock arms.

I don’t know much about French history, but I’m guessing Marianne would be proud.

This work is licensed under a Creative Commons Attribution-Share Alike 3.0 License

Joe Solomon is a co-founder of GreenMemes.org, and is the former social media coordinator for 350.org and Energy Action Coalition. Joe is the co-editor of “The Most Amazing Online Organizing Guide Ever.” He currently lives in West Virginia.