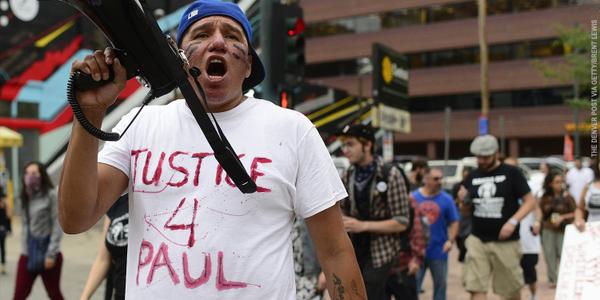 Justice 4 Paul Castaway has announced there will be a second protest of his shooting death at the hands of Denver police, tonight at 8pm local time. This demonstration will take place at the shooting site, the Capitol City Mobile Home Park.

Please come out with your love and support tonight @8pm in memory of Paul. Mother and family will be there. Kentucky n Morrison Rd.

Paul Castaway, a Father, a son to Lynn, a companion, our beloved family member, our FRIEND, OUR community member, was MURDERED by the Denver Police Sunday night.

This is another senseless killing perpetrated by these out of control Public Servants who operate without ANY ACCOUNTABILITY to the public.

The families, loved ones and community of these beloved people deserve a VOICE!
WE DESERVE JUSTICE!
PLEASE stand with us.
As you see, we ALL are in this together

As we reported yesterday, Paul Castaway was a Lakota man with schizophrenia, fatally shot Sunday night as he held a knife to his own throat. The police publicly stated that he was charging officers with the knife, but surveillance video from the scene clearly indicates this was not the case. Further, police stated he had stabbed his mother; she flatly states that they are lying.

Anonymous has twice taken down the Colorado police union’s site in solidarity with the protests.