Tonight’s feature movie is so bad I doubt the copyright holder will even bother hitting YouTube with a takedown notice. It has 5.9 out of ten on IMDB. It’s Android, from 1982, starring Klaus Kinski, which is a perfect storm which could go either way: awesome or dreck-ful. Guess which way they went on this one?

Settle in for an hour and a half of scenery-chewing existentialism, guyliner, and more wistful synth music than you can shake a theremin at. “Introducing Max 404.” Who went on to do absolutely nothing. You don’t say.

Eccentric scientist Dr.Daniel and his shy, clumsy assistant Max, lead a quiet life on their space station where they carry out illegal research into androids, until they receive an unwelcome visit from three fugitives from justice, one of whom is female.

For our cocktail pairing we’re going to go with an Android cocktail, of course. Here, poorly translated from the French by MOI HERSELF, is the recipe. 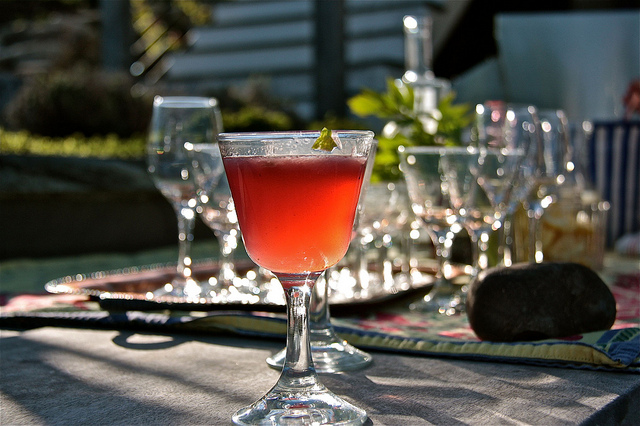 This is the Droid I’m looking for

1/2 lemon
1/2 lime
1 3/4 oz strawberry juice (I don’t know either, I guess you can buy it in France? Or just sub in Pom. Whatever you use, make it sweet to counteract the acid from the lemon and lime)
3/4 oz gin

Juice the lemon and lime into an ice-filled shaker. Add the other ingredients. Shake. Strain into a cocktail glass. Garnish with a slice of lemon and one of lime.

Google Translate tells me the text adds, “Called “Android” and because it was thought ‘in the image of a human being, to simplify it existence’ announces its creator, slightly wacky great mixologist who wishes to remain anonymous. A simple cocktail to achieve and who knows perfectly marry the flavors. To taste absolutely.”

And we are in favour of tasting.

Featured Image Cocktails By The Sea by Smilla4 on Flickr