#Anonymous re-launches #OpSafeWinter for the Homeless 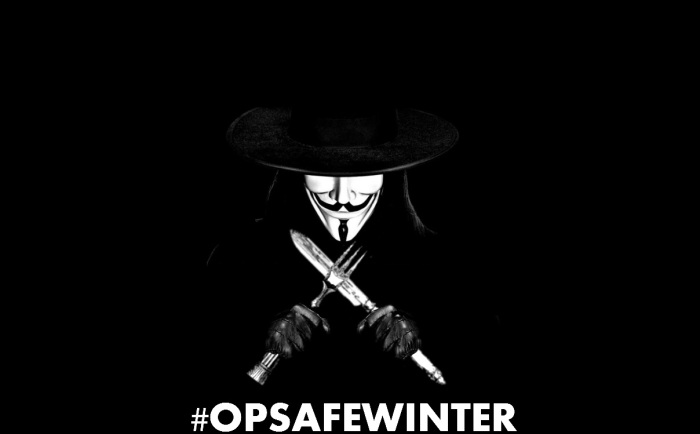 OpSafeWinter, one of Anonymous’ most effective non-hacking Ops, is back (not that it actually went away) and we’ve got an interview with the international team behind it. As is traditional, the interviewees declined to identify themselves, other than as organizers of OpSafeWinter.

Launched November 7 of 2013, the operation aims to support the homeless by providing basic needs like food, warm clothing and camping supplies, as well as by raising public awareness of the housing crisis. It’s also one of the most “outreachy” operations, working alongside non-Anon organizations and individuals who are already active in fighting homelessness. The op grew spontaneously and inevitably out of various winter holiday-themed ops scattered around the globe which had been perennially popping up, winter over winter. In its first year, OpSafeWinter boasted participation from 12 countries on an official basis, and several others on an ad-hoc basis.

The most active countries in last year’s coalition were the UK, the US, and Brazil, where the normally fearsome Black Bloc were highly active in a food and toys drive in Sao Paulo. Throughout the year several local groups continued their operations, liaising with non-Anonymous organizations, creating resource banks, offering soup kitchens and more. Portland produced a Million Blanket March, in solidarity with the spirit of the November 5 Million Mask March. The UK’s East Coast Homeless Outreach project, which is up for an award from the Lloyds Bank Foundation, grew out of the operation. Organizer JediKnight says, “Nov 5th I am planning #OpFeedTheHomeless in London. I have teams ready on standby for donations to give to homeless on the streets all night. We want all people going to London to bring a drink and a sandwich to donate.”

I learned to give Not because I have much But because I know exactly How it feels to have nothing #OpSafeWinter pic.twitter.com/2qA3grLEDG

In traditional Anonymous fashion, the press release was posted on Pastebin first, with a video follow-up. This year’s op specifically calls on participants to help create a census of the homeless in each locale, as well as indexing services both civilian and Anonymous.

Fellow Anon and Citizens of the world, We are proud to re-announce #OPSafeWinter. In this age of consumerism there is very little love or care about each other, and we’re here to change that. No longer shall we stand by and watch isolation and fear be spread by the establishment, which is killing and destroying community and lives. We all have a voice, so make yours heard, you are the power, your choice, your life, you are the motivation for justice.

Our mission: to highlight the homeless situation in areas throughout world. Build up a resource network for food supply, blankets, clothes socks etc. that can be donated. Amenities for warm showers etc.

1st Mission Please list the current homeless count in alphabetical order by town/City Country. Within each town contact local charities, shops, businesses that will support with any of the above list and more. You can get the latest figures from your local council by sending them a freedom of information request if you are not sure of the figures in your town.

2nd Mission, coordinate with anons and others willing to participate in the execution/distribution of services we are able to provide. Whether its’ transport, collection of donations etc.

This is not definitive, any other suggestions ideas are welcome. Please list at the bottom of the pad as bullet points to make it easy to follow.

Lets make winter as safe and comfortable for as many people within our reach and beyond.

The Cryptosphere: What is different about this year’s OpSafeWinter?

AnonymousA: We started with a great team last year, some members have left, some found us as the op progressed, we feel we start this year with a stronger team, with a better idea of whats required.

AnonymousB: In spite of its name, OpSafeWinter was designed to continue year round. Those involved in the Op are global partners and winter happens somewhere on Earth at any given time. Several groups continued the Op through the summer, some calling it OpSafeSummer. Homelessness is growing on Earth, by leaps and bounds, so continuing the Op throughout the year was an effective way to combat homelessness. This year is different because we have set a precedent as a collective last year. We have a solid base from which to start and we have made great friends with many people all over who are continuing the Op.  We also have an idea of what to expect from law enforcement and TPTB this year. Plus, experience with something is always a benefit.

AnonymousA: A honeypot was setup against opsafewinter [in other words, Twitter user @ihazcandy tried to obtain supporters’ IP addresses, presumably so they could collect a list of activists marked for future surveillance]. See http://pastebin.com/qf1S1LN0 and Operation Safe Winter – http://pastebin.com/pcm9dR98. Why anyone would want to attack an operation to help the homeless is beyond me, the guy should stick to chasing ISIL! The pad release (at time of writing this) was less than 48hrs old, hits already 1442.  http://pastebin.com/7M8xe7Br [4451 now]

AnonymousB: We have some forward motion from the success of the Op last year, so we hope that this year people will already be familiar with the idea and practices involved in OpSafeWinter.

TheCryptosphere: What are you seeing in terms  of international participation? Are certain nations more active and  enthusiastic about the op than others?

AnonymousA: Well we have had a surprising result, to be honest. We were taken aback because the op was originally designed on the irc in a chat, just bouncing ideas off each other, and to our amazement within 2 weeks it had gone global. What shocked everyone was the heartfelt response from all around the globe. People just started giving out food, clothes … they just shared the idea and it grew exponentially.

We were kinda shocked also at the business-like and negative response from a lot of charities that we thought would understand and help people down on their luck. It was a Show By Example op which grew and grew. We are of the opinion people want to do and feel good, but with the governments of the world for examples they’re not getting good role models.

Each and every country is different, it has its own culture and the op seems to have touched everyone. It was a spectacular response, and it’s growing daily.

TheCryptosphere: What kind of media coverage has the op had?

AnonymousB: We have had some amazing radio coverage from all over the world.

AnonymousA: Elite daily & some homeless publications in the UK also reported. Mainstream media is sort of lacking, but we see them as part of the problem, doing their governments’ bidding, but all in all we’ve had a fantastic coverage by all that take part. The internet is a great place to share.

TheCryptosphere: Do you seek changes in government policy or do you prefer  citizen action?

AnonymousA: We don’t see national or local governments policies changing to help individuals. Thats why this op has taken off so well around the globe; people don’t like what they see, so the only way they can change it is by making the change themselves. People will always show their governemts up and try to change things for the better. At present a lot of the groups that carried this on throughout the year are having issues with local government, but its being ironed out, charity is charity, its none negotiable when people want to good for one another in a genuine and unconditional, so unfortunately it will rock the boat for big business, but businesses are asked to help, its their choice to act now.

AnonymousB: We have actually seen changes in the government in some areas of the world in regards to helping to feed some less fortunate folks. Some jurisdictions have even gone so far as to outlaw the practice of providing food to the homeless. They cite safety (what else) concerns for the organizations and the homeless population alike.

The Cryptosphere: What is the specific goal of the op? Has it changed at all from last year? And what would total success look like for the Op?

AnonymousA: No change, if you help one person survive winter, great success.  This year though, we have set up an email for people to send us info on their group/organization: contactopsafewinter@gmail.com and we will put them on a global map, having all the help accessable to the homeless and less fortunate can only be a good thing.

AnonymousB: The first goal of the Op was basically awareness: finding out the numbers of homeless in your specific area, and raising awareness about the plight of these marginalized people.  Success would be the annihilation of homelessness, but we’re looking to be a bit more pragmatic at first.

Success would be people recognizing that homeless people are just that…PEOPLE. They deserve compassion and care, just like anyone else. Some actual full-blown shelters have been set up as a result of the Op, [whereas] some see success as a Feed The Homeless Day or a blanket give away.

We think being human is the success, reminding people that we are just as vulnerable as these homeless folks are. In a heartbeat we could be out on the streets ourselves: war, climate change, financial difficulty…it’s all taking a toll on humanity.