Home › Cyberpunk › The WikiLeaks Army has Boots on the Ground

The WikiLeaks Army has Boots on the Ground 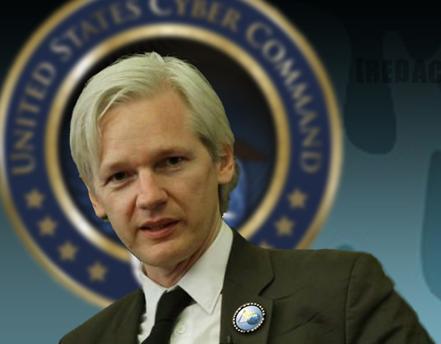 Julian Assange Has a Halo and a new pair of boots!

The day long feared by the Lords of the 1% is finally here. Julian Assange has an army.

Or at least, he has the uniform.

Or at least, he has the most important part, which is a snazzy pair of boots. Presumably they can be accessorized with a nice hoodie from the WikiLeaks shop and a worn pair of conveniently-anonymous jeans.

Who says fascists have the best uniforms?

Thanks to venerable postie and factory worker supplier Dr Martens, Assange now has a self-titled line of footwear. In this he has achieved perhaps the apotheosis of contemporary celebritydom, taking his rightful place alongside such titans of cobblery as Michael Jordan and Jessica Simpson. Only with a righteously 90’s twist. Can’t you just hear the Nirvana?

But back to the boots:

Part of the CORE APPLIQUE Collection

Basic factory footwear was appealing to early skinheads, providing the style inspiration for the Loafer, Lace Shoe and Lace Boot within the Hardwear styles.

The good Dr’s website does not specify the terms of the arrangement with Mr Assange, but since he has taken out an international trademark on his unique name, and since the WikiLeaks twitter account did tweet a link to the boots, it’s logical to assume that a deal of some sort was struck.

Pretty badass; they are basically classic Docs, with fast-lacing metal eyelets for quick getaways  and eight inches of smooth, polished leather above a flexible, bonded sole.

Still no word on when Assange himself will personally need anything more rugged than a broken-in pair of slippers, though.

Featured image via JulianAssangeIsGorgeous on Tumblr