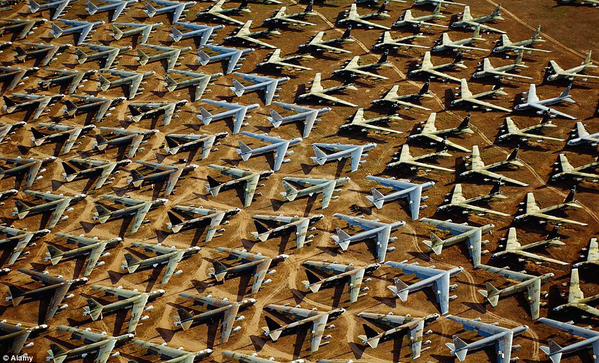 B52 Bomber Boneyard via Abandoned on Twitter. Not actually an Escher drawing.

Welcome back, kittens! We have been extremely involuntarily offline thanks to our laptop taking a Negroni directly to the keyboard. Sticky cocktails do not a happy laptop make: who knew? After giving it a good vodka chaser (well, rubbing alcohol, but who can tell the difference between that and cheap vodka anyway) it seems to have returned, sulkily, to life. For as long as it lasts, we are here for you, kittens!

Everyone knows that cyberwar and hacktivism links are part of your nutritious breakfast. So here, sifted from the 105 YES 105 links we’ve been saving up to post, are the choicest. You will notice that a certain LARGEST HACKING STORY IN YEARS is missing…but more on that later. Don’t touch that dial!

In Well Duh News Today: CSAIL report: Giving government special access to data poses major security risks (MIT) Not only are governments prime hacking targets, but by forcing you to offer a backdoor to government, you offer it to hackers too. By definition, a backdoor is a security risk of the first order. And it adds complexity to the existing systems, and complexity allows scope for weakness. And every additional device which has access to your data is a new vector of potential attack. There, now you don’t have to read the report. Don’t say we never did nuthin’ for ya.

Coinkydink: Bizarre: New York Stock Exchange, Wall Street Journal, and United Airlines all downed by technical glitches (Salon) We’ll have more on this story later in the day, too. OH MY GOD IT’S ALL CONNECTED conspiracykeanu.gif

Are the hoodies mandatory? Are they all part of some Brony cult? The Secret Lives of Hackathon Junkies (TheAtlantic) And hey, don’t these kids have jobs? What? WHAT? YES IN THIS ECONOMY? Shut up. Why aren’t you in Iraq?

New York might waive the requirement for bail for non-violent offenders. (AP) But not because they’re kind: because of that kid who killed himself after three years of avoidable-had-he-been-richer pretrial custody on Riker’s Island. And because their jails are full.

That’s all it takes? Hell, I gotta Skype account! Hackers targeted employees of a Bitcoin exchange via Skype before stealing $5 million (BusinessInsider) Skype me all your Bitcoins plzthxkbai

The Mob’s IT Department: How two technology consultants helped drug traffickers hack the Port of Antwerp (Bloomberg) Your Longread of the day. Also, when did Bloomberg fall in love with HTML5?

We’re ALL extras in Archer now, kittens. Tradecraft: The Counter-Surveillance Route (FifthColumnNews) You can either cease to exist, or get some skills.

Argentina: Leading the Killing the Messenger stakes for July. Police raid programmer who reported flaw in Argentinian e-voting system (ArsTechnica) And gee, ArsTechnica, we hardly knew ya. Hope you like malbec.

The Department of Homeland Security wants to start a new department to fight violent extremism. Which leaves open the entire question of what the rest of the DHS is for… (Reason)

Out of prison and in the media: John Kiriakou, CIA Officer Turned Whistleblower, Shares His Story (Washingtonian) They should start a club for ex-whistleblowers. Meetings in the Ecuadorian Embassy.

Reminds me of the time I was on morphine in the hospital and insisted on watching this movie. Made TOTAL LINEAR SENSE, at least until the drugs wore off. Fear and Loathing in Las Vegas run through Google’s Deep Dream neural network is pure nightmare fuel (TheIndependent)

Hello, Redhack? This is an interview request. Yes, I’ll hold. German-owned Patriot missiles stationed in Turkey were briefly taken over by hackers (TheLocal)

The NYPD is paying $330,000 to six Occupy Wall Street protestors it pepper-sprayed (Reuters) But will it stop doing that?