A Deadly Crossing: Migrant Search and Rescue, an Infographic 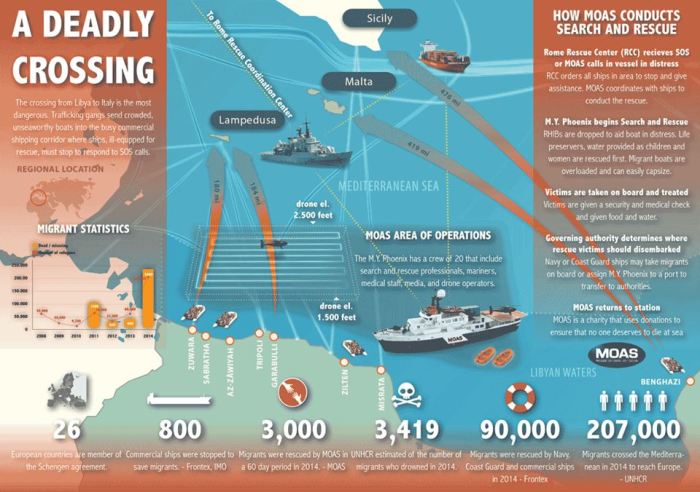 With increasing tensions in Australia over the issue of migrants, as well as the recent sinking of a boatload of Libyan refugees, with an estimated death count of 800, the issue of water-borne refugees is one the world is finally paying attention to. As this infographic from the Migrant Offshore Aid Station (MOAS) reveals, an estimated 207,000 migrants left Africa on these sub-standard, mostly incommunicado ships.

Interestingly, MOAS staff includes drone operators, who search the busy shipping channel between Libya and Italy for migrant boats in trouble. Once found, the news is relayed to Italy. Rescues are coordinated from the Rome Rescue Center and the M.Y. Phoenix is dispatched to perform the rescue, as home base contacts commercial ships in the area to offer assistance.

From the notes on the Vimeo video, dated March of 2015:

MOAS, a private rescue initiative that was set up by humanitarians Christopher and Regina Catrambone, is equipped with a ship, two rescue RHIBs and two drones which help to locate migrant vessels in distress.

MOAS has raised some €40,000 since it launched an appeal for funds at the end of October. Much more is needed to fund next year’s operations which cost some €400,000 per month.

“Think of all the families fleeing their homes this holiday season because of war, unrest and poverty. These people do not deserve to die at sea. A donation to MOAS this Christmas could make the difference between life and death,” said Regina Catrambone, MOAS founder.

Donations can be made on moas.eu/10/Donate.

To monitor the progress of the vessel and keep up to date with the latest news, follow MOAS on twitter @moas_eu and use the hashtag #MOAS to enter discussions about migration.

Once the migrants get to the other side, however, their journey has just begun. The most fatal part, though, is blissfully behind them. 800 people from just one ship didn’t make it yesterday. Without a coordinated rescue effort, and the participation of commercial ships in the rescue, how many more would have died? And how many will die in the coming busy summer months?