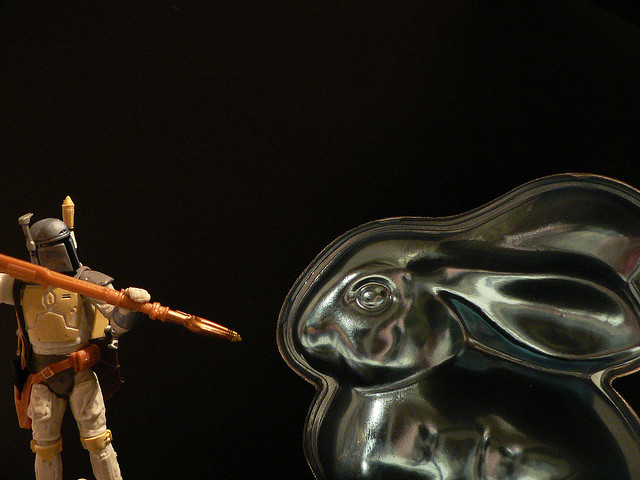 Boba Fett vs the Cyber Bunny by lamont_cranston on Flickr

Happy Start of Easter Month, kittens! Are we excited yet? If not, it’s probably because you cannot experience the glory which is Kinder Eggs, because you live in a benighted part of the globe, or perhaps because Cadbury changed the recipe of their magnificent Easter Creme (“krem” is such an awful word) Eggs. Indeed, a creme against nature and humanity and the very concept of high fructose corn sugar-fueled holidays itself!

Stir a second spoonful of sugar into your morning coffee today and raise your cup to a new dawn, a new today, a new week, a new roundup of cyberwar and hacktivism news. Just a spoon full of sugar makes the clumsy segue go down…

The United States Is Angry That China Wants Crypto Backdoors, Too (Vice)

Can you shoot down a drone on your land? New incident raises self-defense questions (GigaOm)

FORK ME! Uber hauls GitHub into court to find who hacked database of 50,000 drivers (TheRegister)

My War on Terror: Letter to an Unknown American Patriot (Tomgram)

How to Cope with File Encrypting Ransomware (Shhh-cretly)

From the Collected Voicemails of Hunter S. Thompson (DangerousMinds)

Like Loading...
‹ Hacktivist Lauri Love on AnonUKRadio
Two Short Reads: A Feminist Review of the ISIS Female Recruitment Manual; and The Parade With The Drums from Anonymous Publications ›