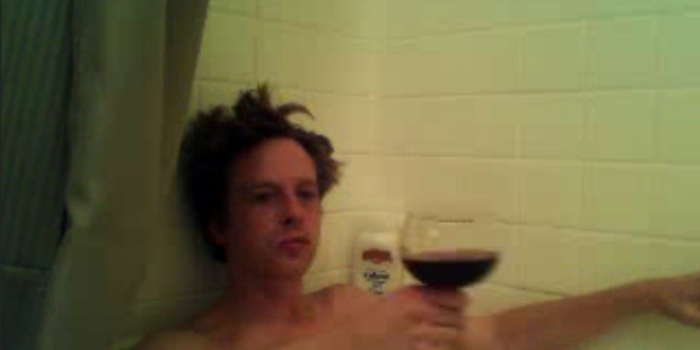 Hope Barrett Brown gets out today. The Internet became an insufferable infomercial without him.

Who’s Barrett Brown, why do we have video of his September 12, 2012 arrest, and why in heck would you care? Here’s the 411 on BarrettBrownLOL.

Barrett Brown is a journalist, fameball, and activist who is closely allied with Anonymous and has often been called a spokesman for the collective. He is also the founder of Project PM, whose mission is to detect, track and expose information security contractors and programs of the Stratfor/HBGary/PRISM ilk; essentially to do from the outside what Edward Snowden has done from the inside. He’s also a polarizing figure because he has no shortage of ego.

But then, after a livestreamed FBI raid and two and a half years of pre-trial custody, he has no shortage of cred, either.

Despite having been in custody continuously since the arrest, Brown has been a regular, and outspoken, contributor to D Magazine’s Frontburner blog, his column titled The Barrett Brown Review of Arts and Letters and Jail, where he muses on, largely, Barrett Brown. But then we can’t blame him; it’d be an odd prison indeed that held subject matter quite so intriguing.

Although he originally faced up to 110 years in prison (a figure familiar from numerous US hacktivist prosecutions over the past two years) on 17 different charges including threatening an FBI officer, his lawyers have argued it down to a plea deal which would include a maximum of 8.5 years in custody. Details of the plea have been sealed at the prosecution’s request. According to Wired, “the government charges Brown with two crimes: allegedly assisting the person who hacked Stratfor after the fact, and obstructing the execution of a search warrant targeting Brown.” According to the Free Barrett Brown website, he pled on three charges, not two, but it does not specify the charges. Those charges, whatever they are, are the charges on which he is being sentenced today.

The collection of three related videos on my YouTube channel have been through their own little drama over the past two and a half years.

The night of the arrest, I was contacted by an anonymous (rather than Anonymous) third party and pointed towards another source who had first-person video of the Tinychat session in which the arrest took place. How long do you think I hesitated before saying Yes? Once I was in possession of the video, which was indeed what it purported to be, almost 45 minutes of it, I uploaded it to my YouTube account, set it to Public, and spammed the hell out of it globally, as one does.

Since that time the video has been the subject of three takedown attempts via reports to YouTube. The specific point of contention was an alleged privacy violation: the first of the three notices, which arrived September 23rd, listed the violation as occurring at “42_42-42_56,” and it was unsuccessful. Another, sent the same day, referred to a smaller video, cut from the main video, and focusing on the moments just before the unsuspecting Brown answers the door; in this one the complaint referred to the first fourteen seconds of the video. Interestingly, although I challenged the notice, the audio between the six second mark and the seventeen second mark has been muted or garbled.

I certainly didn’t do that.

The third notice referred to the longer video again, and this is the one which resulted in the takedown. According to the complaint, the specific violation of privacy policy occurred at 42 minutes and 40 seconds to 43.24. That is the period during which Brown gives a specific proper name and ties it to ReaperSec member and Jester supporter @Cryptkper.

After 2.5 years, on the eve of sentencing, and after at least one previously unsuccessful attempt to tangodown the video, it seems odd timing, does it not? When I attempted to contact the YouTube email address with which I had been communicating previously, I received a bounce notification. Because of that, I’m only guessing here when I say that Brown’s mention of that specific private name and that twitter handle could only be a privacy violation if the name were correct.

Which would seem to make a takedown notice sent to a journalist somewhat counterproductive with regard to privacy, no?

At least more than Barrett Brown did at the time.

UPDATED TO ADD: There’s a Tweetstorm.  It has 99 tweets. Copy and paste (and make Jay-Z jokes) at will. Here’s a taste.

2.    Were u too busy to send a letter to Barrett’s judge? Life is like that. You could still send a tweet to show him your support #FreeBB Dec16

4.    The powerful hope you don’t care about a lot of things,they hope you are too busy for other people. Why be what they want? #FreeBB Dec16

5.    BB:”I will here provide as much information as I can on Romas/COIN & its upcoming replacement”They locked him up 2 shut him up #FreeBB Dec16

6.    Can’t make sense of the craziness right now? You know what would help? Having Barrett Brown back to work #FreeBB Dec 16 We need him back

7.    BB:”The Gov did such poor job of handling @wikileaks & Anonymous – it shows why @wikileaks and Anonymous are so important’ #FreeBB Dec16

8.    BB quote @Projpm “ I think we need to look at how we can better organize our efforts”  #FreeBB He is in prison because he ORGANIZED. Dec16

10.    Barrett Brown could make sense of, and distribute complex info to ordinary citizens via @ProjPM The Gov didn’t like it. #FreeBB Dec16

11.    BB on surveillance:”To combat these dynamics we need to have a long conversation” #FreeBB Dec16.They want him forgotten. Don’t.

See our full coverage on the Barrett Brown case here.