Home › Hackers › Who Gets Shot in America?

Who Gets Shot in America?

Fascinating study compares shooting victims in different states by race, comes to some surprising conclusions. Of course, the most obvious finding, that black people are disproportionately victimized by shootings, comes sadly as no surprise. Asians don’t even make the list.

Embry Howell, Sam Bieler, and Nathaniel Anderson of the Urban Institute have an interesting new paper (PDF) based on hospital data from six states. The number capturing headlines is their estimate that, nationwide, treating gun injuries costs almost $670 million a year, most of which is paid for by taxpayers.

We shouldn’t get too caught up in this statistic. As the authors themselves have noted, the toll of gun violence goes far beyond hospital costs — and I would add that, contrary to the widespread claim that $670 million is a lot of money in this (national) context, it amounts to just $2.13 per person in the U.S. There are many reasons to make the prevention of gun violence a priority, but the potential to save an amount of money equal to 0.01 percent of total government spending is pretty low on the list. 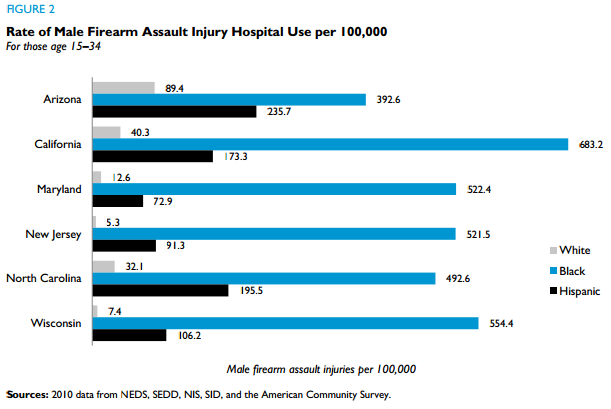 Like Loading...
‹ Why Oil Companies Are Rogue Actors
“I am not a monster and I am not unreasonable:” Student attacks professor with axe after grant is cut ›