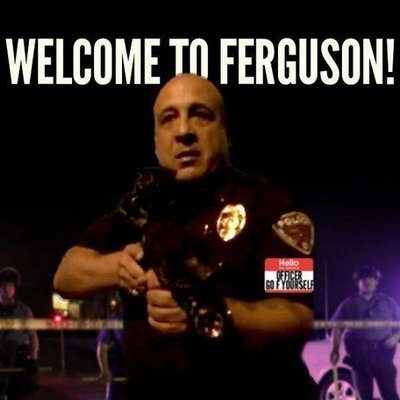 When we were kids we had imaginary friends. Then we grew up and gave those childish things up in favour of following satirical Twitter accounts like respectable grown-ups. Let’s talk to one of them, shall we?

Officer GoFuckYourself, on duty to keep the peace in Ferguson, Missouri after the killing of Mike Brown, became an international celebrity of sorts last Tuesday, August 19, when he pointed his gun at a cluster of media and protesters and yelled “I will fucking kill you…go fuck yourself!”

Officer Friendly, he is not.

Officer GoFuckYourself turned out to be (as revealed by Anonymous and others) St. Ann police officer Ray Albers, who was immediately taken to task by a St. Louis County police sergeant at the scene, and shortly afterwards suspended indefinitely.

Not long after that, the twitter account @OfcGoFuckYourself emerged. Although Albers presumably has plenty of time on his hands, we’re relatively sure this isn’t him.

I want to put the rumors to rest… No, I did not shoot #SugeKnight.

It seems my long and productive career intimidating black ppl is over… Does anyone know if #RickPerry2016 is hiring?

It’s not really an outrage until it has a satirical Twitter parody. For that reason (and also because you can’t shoot a gun through Twitter) we reached out for an interview, conducted via DM.

TheCryptosphere: Who takes you seriously and what kinds of things do they say to you?

Officer GoFuckYourself:  I think the name of the account makes it difficult for anyone to actually take it seriously. Early on, there were ppl who didn’t know the story and thought I was actually a cop. Mostly just horrified reactions, but it usually didn’t take long before they caught on

Who thinks you’re a terrible human being and what do they say?

Same kinds of people that think I’m a terrible human being on my regular twitter account. I fucking hate police and I’m not shy about it.

Who gets it and what do THEY say to you?

The VAST majority of people got the joke and the reaction has been universal that its REALLY funny. Which is what I was going for. I like to make people laugh :) It makes it easier to deal with the harsh realities of what an unjust world we live in.

Have you heard from any official person,: lawyer, police agency, etc?

Are you having fun?

Are you doing a story arc, or is it just on a whatever-you-feel-like basis?

Definitely whatever strikes me at the time. Rate of mentions/follows will determine when I pull the trigger on the finale.

Are you from Ferguson or environs?

I’m not from Ferguson but my police department has a more infamous history of violence and I grew up in a city just as racially divided.

Why did you do this?

See #3. Racism and police murder/rape/kidnapping are hard to handle. Laughing makes it easier to stop yourself from crying.

Care to tell us your real name? Not required, but some people like to.

Have you heard from Albers himself? His fans?

Haven’t heard from him. Definitely hear from his fans!

What are you getting out of it?