Home › Activism › The People Want to Be Able to Live

The People Want to Be Able to Live

This is a repost of Hamilton Nolan’s article of the same title on Gawker (not a lot of crossover in audiences, I’m thinking). Nolan has long cataloged the crimes of corporate and individual overlords and the economic and security losses sustained by the working people of America. We picked this article in particular for the nuanced subtlety of its first line. 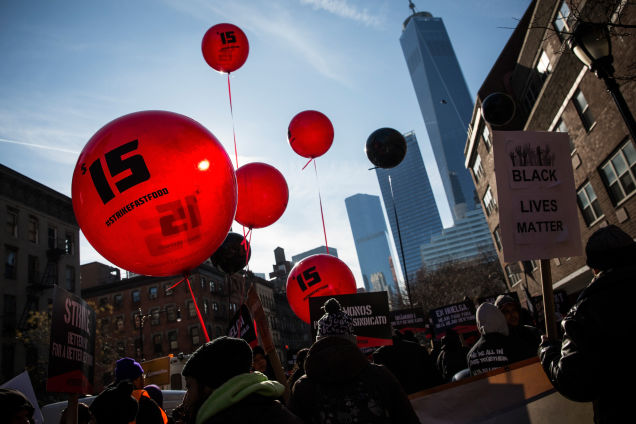 Shit is fucked up.

Yesterday evening, we all streamed off the subway at 49th Street, whole cars full of angry young people with homemade signs, right up to the middle of the avenues above, weaving through stopped cars, chanting about Eric Garner, late into the night.

Early, early this morning, when most of last night’s marchers were still asleep, another group of protesters—another group of working people—massed at a McDonald’s in Downtown Brooklyn. They marched. Not just for Eric Garner, but for themselves, and for everybody in this metropolis who is unable to make enough money to live a life that someone would want to live. By ten minutes til eleven, the group of marchers, which stretched the length and breadth of one and half city blocks, was standing in front of a Food Emporium on Greenwich Street in downtown Manhattan. A handful of drummers pounded a steady beat up front, and the entire drum section of a marching band, in uniform, pounded their own beat in the middle. Beach ball-sized red and black balloons with “$15” emblazoned on them floated overhead. The people danced in place behind a banner that read “STRIKE: Better Pay for a Better New York.” These were the fast food workers. And the airport workers. And the labor organizers and the reporters and the camerapersons and the police lining the streets, who all moved in a cloud around them. They were here, and in 189 other cities today, to ask for enough money to live on. They were also here to smile, and make noise.

Just ahead of them, a city park service employee carefully welded a park fence, oblivious to the throbbing drums half a block away.

Everyone was blowing whistles, in time with the beat, sounding like a massive flock of birds. The group streamed up Greenwich Street to the corner of Chambers, where a McDonald’s sat, full of young people and young moms and old people enjoying cheap cheeseburgers. And instead of camping outside the McDonald’s, the entire group marched straight in through the front door. Drummers and banners and sign wavers and oversized balloons and shouting workers, straight in the door, like a huge group of clowns climbing into a tiny Volkswagen. They swarmed right up to the counter, chanting and blowing whistles, filling in the whole store, as cameramen jostled and elbowed for angles. One young McDonald’s customer in headphones and a baseball cap kept his eyes locked on his laptop screen the whole time, never turning his head. Another, an old woman, just smiled beatifically and clicked pictures on her cell phone. After two minutes police officers strode in shouting “Everybody out! Everybody out!” and they all just streamed back out, chanting the whole time. The last to leave were four teenage fast food workers blowing huge plastic horns in the glorious chaos of the McDonald’s lobby, momentarily living the ecstatic proletariat version of Lord of the Flies.

Outside on the corner, there were short speeches. The gleaming new Freedom Tower absolutely LOOMED overhead, just blocks down the street. There were more chants, with “Hands Up! Don’t shoot!” anti-police brutality slogans mixed evenly with “15 and a union!” pro-labor slogans. Then the whole seething mass proceeded down Chambers Street, towards City Hall. Dancing marchers paused outside of a Subway store, holding up signs. As the group passed a pizza restaurant, the white-clad workers inside stopped tossing dough and stared out the plate glass window, slackjawed.

All the Marines came out of the U.S. Marine Recruiting Center and stood on the front steps in their camouflage uniforms, taking pictures.

At Le Pain Quotidien, amid decorative pumpkins, people in sweaters gazed out blankly over their scones.

In the lobby of Tribeca Dental Studio, women touched their chests and gasped at the passing hordes. In Tribeca Pediatrics, young mothers stared out over a row parked baby carriages.

“What do we want? Justice!”

At the New York Vintners wine shop, a man in a jolly holiday sweater poked his head out the door. His expression morphed from alarm to intrigue. Across the street, The Wall Street Humidor cigar store was locked up dark and silent.

In the TD Bank lobby, the loan officers sat with their backs to the windows as the throbbing crowd passed. None of them appeared to turn around.

And then we were in front of City Hall. The group filled in up to a small stage that had been erected, surrounded by loudspeakers. On the corner of Park and Broadway, the Official New York City Information Kiosk had been preemptively closed for the day. Backstage, Jacquelin Martincic, a thin and intense woman who works at the Wendy’s on 33rd Street, said that this was her first strike. She makes eight dollars an hour. She works thirty hours a week; the store won’t give anyone more hours than that. She lives in a city shelter in the Bronx. She can’t afford to pay for an apartment. “I have to decide between food and medication,” she said.

Directly across the street, the white stones on the front of the grand gothic Woolworth Building gleamed in the sunlight.

Walbert Santiago, who works as a security guard at LaGuardia airport, makes $10 an hour, the same wage he made a year ago when he started. He lives in Elmhurst, Queens. “Are you optimistic about this campaign?” I asked him. He frowned, and shook his head slowly. “Not really.” “Do you think the people you work for are listening?” I asked him. He stared impassively. “I hope they’re listening.”

If you looked up, up, all the way up the facade of the Woolworth Building, up into the blue sky, you could see balconies surrounded by netting. Two “pavilion residences” with private terraces are available for purchase.

“I can’t have a good Christmas this year,” Jacquelin Martincic said, “because I only make $8 an hour.”

From this angle across the street, you could just see the tips of the stone spires sticking up at the top of the Woolworth Building. They framed the penthouse apartment. It is for sale for $110 million.

A local bishop had taken the stage. “Well here we are once again,” he said to the crowd of working people. “Still in the struggle.”

Hamilton Nolan is the longest-tenured writer still at Gawker Media. His work there includes publishing the serial Hello from the Underclass: Stories from the Unemployment Line, as well as exposés of working conditions and profit margins at Walmart and Amazon. Explaining his metamorphosis from PRWeek hack to champion of the proletariat, he told Romenesko, “I realized very early on that you can be friends with everyone or you can say what you actually think about everyone, but you can’t do both. If you want the privilege of saying exactly what you think about media people, you have to accept that you might not be that popular with media people. But I feel like I’m OBLIGED to speak the unvarnished (and sometimes mean) truth as best I can, because our role here is to say that stuff for all the people out there who aren’t in a position to say it, but wish they could.”

Author photo via the Daily Banter.

Like Loading...
‹ Interwebbed: Cyber and Crypto News for Dec 8
The Dream Leads to Nowhere: The Farcical Use of the #Anonymous Collective’s Imagery to Instill Fear, Uncertainty & Doubt in Corporate Warfare ›