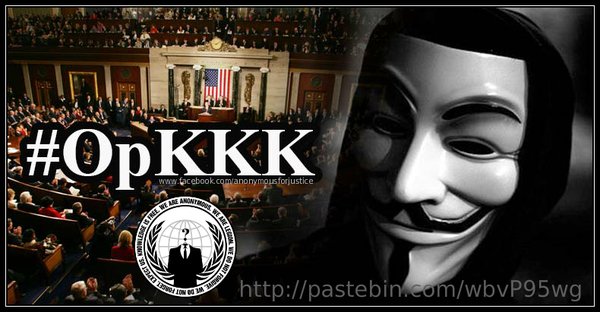 Well, it’s finally here: the long-awaited list that Anonymous’s OpKKK has been collating for a year, since the first OpKKK which grew out of OpFerguson, which itself came into being over the apparently racially-based shooting of Michael Brown by police officer Darren Wilson. The KKK decided to get involved, to “protect” the people of Ferguson, which is 67.4% African-American. Anonymous collectively got in their faces, literally in the case of videographer Alex Poucher, who invited Frank Ancona, Imperial Wizard of the Traditional American Knights of the Ku Klux Klan, to a sit-down interview at a diner, frequently masked man to frequently masked man, masks off.

OpKKK was born on Friday, the 14th of November, 2014, in response to KKK flyers threatening protesters with “lethal violence.” As we reported at the time:

The outcome was relatively predictable, as everynewsoutlet on the planet has alreadyreportedwhile I was offline. Anonymous took the KKK site offline, and doxed its members in and around the StLouis/Ferguson area via #, while simultaneously seizing control of a central KKK twitter account.

Well, turned out that “KKK twitter account” was a false flag, and a highly effective one: it was a straw man fake KKK account set up by Anonymous, built up over time, and then, at the right moment, “seized” by Anonymous. Propaganda wars are so interesting, aren’t they?

This year, what’s new? About 500 new names released, an embarassing KKK predeliction for the nearly-dead Google Plus social platform revealed, and the side-note of a very interesting list of members of the KKK who are also associated with the FBI. Whether that confluence is an expression of political support and exercise of the right of freedom of association, or for the purposes of surveillance and information, is as yet unclear.

But since those names are now public, we might as well just, you know, Ask them.

The official pastebin release (better download, it’s sure to be gone soon; the pastes from last year were removed promptly) has a lengthy introduction which discusses everything from the taxonomy of the KKK to the implications of one masked group outing another and how a Kantian ethical approach justifies OpKKK. Here’s a slightly edited (for length) excerpt of the most important parts of the intro.

Where to Start? The basics. The Ku Klux Klan has approximately 150 active cells, operating in 41 states, with membership concentrated in both the South and the Midwest. At its peak, membership was in the millions. Now, membership is likely less than 5,000. It is very important to understand – the KKK does not have a central unified leadership. Instead, they are split off into local cells or groups.

These groups generally oppose interracial relationships, homosexuality and illegal immigration and historically express this ideology through acts of terror. We want to remind you: This operation is not about the ideas of members of the Ku Klux Klan. This is about the behaviors of members of KKK splinter cells that bear the hallmarks of terrorism. When members of the KKK like Frazier Glenn Miller, (founder of the Carolina Knights of the Ku Klux Klan and the White Patriot Party) murdered three innocent individuals at a Jewish retirement home during Passover – the word “terrorism” was seldom found in mainstream media’s coverage of the attack. Why? What sort of violence does it take to call *some* factions of Ku Klux Klan what *some* of these cells really are?

We defend free thought and free speech. The anons responsible for this operation will not support *acts* of terrorism and *acts* of hate inflicted upon the public. The KKK is part of an important cultural landscape and history in the United States. We need to make room for important, blunt, honest, public, productive conversation. Violent bigotry IS a problem in the United States. This is not a colorblind society. It deeply divided on racial lines.

We hope Operation KKK will, in part, spark a bit of constructive dialogue about race, racism, racial terror and freedom of expression, across group lines.

In this dox list, you will find official members of various KKK groups throughout the United States as well as their closest associates (most are also in other extremist hate groups). The klan sometimes hides behind several online identities. Given name or alias, these are the real people underneath the hoods.

Data collected for Operation KKK was gathered over approximately 11 months and those included on this list were identified primarily through HUMINT (human intelligence) data collection strategies. This means that individuals on this list were often identified by human sources of information through both overt (interviewing expert sources) and covert (digital espionage / social engineering) methods. Individuals on our list were also identified through open source intelligence strategies (OSINT). This is a broad array of information and sources that are generally available to the public. This includes: multimedia, academic records and public data. Members often told on themselves to us about their connections with the KKK during various chat conversations we had with klan members and affiliates throughout the course of our operation. You never know who you are talking to on the internet.

We understand this initiative is extremely controversial and we know we will face much criticism for this operation and our work will be heavily scrutinized. We hope this body of work speaks for itself. This is the OFFICIAL Operation KKK 2015 intel report associated with the @Operation_KKK Twitter account. The anons at @Operation_KKK are responsible for this specific liberation of information and we have done our best to ensure accuracy and avoid collateral damage to innocent parties. Erring on the side of caution, we removed several names from this list for further evaluation.

We consider this data dump as a form of resistance against the violence and intimidation tactics leveraged against the public by various members of Ku Klux Klan groups throughout history.

Big shoutout to some of the KKK FB accounts that gave us access to secret groups and other klan accounts for #OpKKK pic.twitter.com/NHjSEa6Tu5

That’s the thing about social groups: once you’re in one, you’re introduced to the others. Start hanging around AnonOps, meet Cyberguerrilla, and on and on it goes.

We removed several names from our list for further investigation. We would rather have a smaller, accurate list that we are comfortable with

You can see on the paste itself the note that it has been edited: only the original poster, or someone with access to that account, can do that, so edits are deemed “official” in as much as anything can be official which originates with a faceless hive mind.

Last year, the world (particularly the media world) eagerly awaited the release of the Anonymous dox of the officer who shot Michael Brown. At that time, a dox was released, quickly disavowed by the Anons working on OpFerguson, which incorrectly identified the police officer. The named subject had to go into hiding, but had nothing to do with Brown’s death. Media coverage of the dox and the fallout when it was found to be false, was massive.

That “faildox” dissipated a significant amount of public faith in Anonymous, and stalled the media momentum for OpFerguson, which then had to spend almost as much energy apologizing and clarifying as it did researching.

This year, a similar event occurred with OpKKK, and surprise, surprise, the same account is involved: then called TheAnonMessage, now known as TheAnonMessages, it remains, for some reason, a favourite with the mainstream media. It has been quoted in Business Insider on a Pirate Bay conspiracy theory, Huffington Post, Forbes, Time magazine (where this reporter was quoted refuting it), and many other outlets. It continues to be quoted despite the fact that as you can see from those links, many of those articles had to be amended afterwards when it turned out the information was false. Its reach is remarkable, moreso when considered against its record of faildoxing days before the real releases come out, repudiation by reputable Anonymous accounts whose operations have been thus pipped at the post, and failed singlehanded operations, as with its operation against Iggy Azalea.

There was also his fake suicide, and the time he pretended ISIS had taken over his Twitter account.

Back on-topic, this year there was even more chaos in the mix, as a lone hacker, Amped Attacks, released his own list of KKK members, independent of Anonymous and specifically refuting any link.

i am not apart of anonymous nor have i ever claimed to be,i am my own man that acts on my own accord.i do however respect #OpKKK

His list was released on Halloween, contained the names of several prominent politicians, and has been strongly denied by those officials. Additionally, he took responsibility for several DDoS attacks which knocked KKK websites offline temporarily.